One of the best ways to see New York, from the river

New York from the Rockefeller Centre 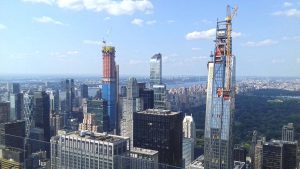 No, wasn't fine all the time! Heavy showers at times with thunder and lightning!

On our arrival at JFK airport, our daughter had arranged a surprised stretched limousine. Which just as well, because one all the family, plus luggage and double buggy were inside, we were still cramped!

Yes, we stayed in the middle of Manhattan, close to Grand Central station. Needless to say the city was both hot, humid and very busy. Too much concrete for my liking, with Central Park offering the only relief from the city. But the major art galleries are well worth a visit.
With only four days in the city, the iternary was a bit hectic!

A visit to New York wouldn't be complete without a trip to see the statue of Liberty. Though you can get close to it by taking the free Stain Island ferry, we took a river cruise in the evening which included a trip up the Hudson river to see New York at night. Fortunately the weather was perfect. If going, make sure to book everything well in advance!

Another view from the river cruise. Takes around two hours. A great way to see the city when lit-up, providing the weather is fine! I found getting around New York using the subway problematic, so used Uber which worked well and not too expensive if several are travelling with you.

Yes, everything in America is rather on the large size, including the Chevrolet we hired to travel 1,100 miles in, starting in New York and finishing up in St. Petersburg in Florida. It's surprising how quickly one adopts to driving on the right side of the road, though you need to have your wits about you when driving in built-up areas. The car's navigation was spot on! Virtually to the inch it was that accurate. Without it, one would struggle to  navigate, especially in towns and cities. A big bonus is that petrol is much cheaper than in the UK.

We stayed 4 nights in the cabin in the town of Gatlinburg, Tennessee. This area is known for its arts and craft community and I only had time to visit Jim Gray's art gallery. Jim is a well-known both American and international artist, self-taught.

Visit to Museum of Modern Art

One of my ambitions is to have travelled to New York and the Museum of Modern Art to see Les Demoiselles d'Avignon is a large oil painting created in 1907 by the Spanish artist Pablo Picasso. This painting helped to revolutionise painting into the modern era. If ever in New York, so try and visit it, given its importance in art history. I went as soon as the doors opened and headed straight for the painting, giving me time to view it undisturbed before the masses arrived! You do have to admire Picasso when you stand before this painting. How radical he, and George Braque, were in changing the way artists saw the world around them. For many years Picasso wouldn't show this painting, fearing the adverse response it would attract! When stood in front of it, it's hard to imagine it was painting over a hundred years ago and still looks in pristine condition, though I believe it's now too fragile to be moved.

I thought this image was interesting. Though I've seen the concept before, the John Moore's painting prize held at the Walker art gallery, Liverpool, I'm stilled touched by it. The artist walked the streets, looking for discarded messages, and found this one. Then recreated it as a piece of art - art from the street.

An interesting take on how to tackle a subject

I thought this image by Ellsworth Kelly very interesting. Our first approach to a subject is to faithfully copy it, rather than 'interpreting it' and expressing your own personal way of depicting a subject.

Ellsworth Kelly began his studies as an artist at the Pratt Institute in Brooklyn in 1941, and the same year enlisted in the U.S. Army. In 1944 he participated in the operations in Normandy and Brittany. During the time his division was stationed in Saint-Germain-en-Laye, Kelly made his first trip to Paris. When he returned to the United States, he entered the School of the Museum of Fine Arts in Boston, where he began training as a realist painter. In 1948, Kelly took advantage of the G.I. Bill to return to Paris, where he stayed for six years. While the years between 1948 and 1954 were crucial ones for the Abstract Expressionists in New York, Kelly's work, away from this influence, developed a greater affinity with that of Matisse and Arp.

Kelly's arrangement of the complementary colors, which work to intensify one another at their intersections, is also an essential component of the work. The opposite colours of red and green both add to the boldness of the work and divide the overall rectangle into distinct units. The artist has also exploited the tendency of warm colors to appear to come forward on the picture plane, and cool ones to recede. While the bright, unmodulated colours are unequivocally two-dimensional, we can nevertheless read the red strip at the bottom as foreground and the cool green and blue as receding background. When viewed as foreground and background in this way, the sources in nature for Kelly's forms are suggested. Blue and green are the colors of water and earth—perhaps lake and field, as indicated not only by hue but by the swelling, fluid shape of the ellipse and the flatness of the green surrounding it. While the painting itself is continuous with the European biomorphic tradition, its scale is that of the huge close-ups of billboards and movie screens—a very American form. (image and text description taken from Metropolitan Museum)

I've long been an admirer of Sergeant's paintings. When alive, he was regarded as the world's foremost artists, especially for portraiture and painted all the famous people in the early part of the 20th centaury. Was also a war artist in the First World War. Went out of fashion for around 40 years, now he's been rediscovered. Also an accomplished watercolour artist.

Once again I was much impressed with this painting by Edward Willis Redfield. Done very much in an Impressionist style, the paint applied thickly. I thought an excellent use of paint on canvas.
Edward Willis Redfield was an American Impressionist landscape painter and member of the art colony at New Hope, Pennsylvania. He is best known today for his impressionist scenes of the New Hope area, often depicting the snow-covered countryside. Wikipedia